**this is a blessing of a blog for me tonight. Through writing tonight I made some huge connections(so please excuse the jumbled thoughts…and thank you for continuing to ride a long with me***

Its like I cannot absorb that this is all real. That she is really gone..forever. I walk by her clean…and still untouched by her room and its like a slap in the face. 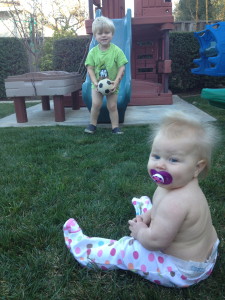 Tonight I sat outside while the kids played and Tony and a friend worked on a home improvement project…aka man therapy. I realized how happy my kids were, Charlotte especially since she is always with me, to just be outside. I still am not comfortable outside of these walls and now back fence…its an illusion of control or protection maybe?  I look around and see them happily running and playing…I see the boys trying to figure out how to play together without her as their leader.

and I just miss her.

I notice she is gone. I’m aware both logically and apparently physically, since that familiar sting comes to my eyes.  Yet somehow it just doesn’t penetrate. I look at them and think something is just off with this picture playing out in front of me…I know its her..I know its that my daughter, their sister, that she is missing and that is what is off….

but it still seems like some sort of trickery … a sleight of hand.

I warned the men folk I would cry. A change in our home that she will never get to see. I can’t even explain it..but it really makes me sad. And I feel guilty .. .like any change that was worth doing we should have done it while she was here….and how can we really be moving on…

Last night I read Jonathan books before bed in her room. And we cried together. About how much we missed her and hoping she can find a way to visit us. As this was happening people were showing up at our house. We had a small gathering of people to help us brain storm some basics for the non-profit. We will be doing that the right way for us and part of that is taking our time and getting feedback…Some of these people we haven’t seen since before she even got sick.

Crying with my son…laying in his bed talking about Jennifer…I wondered how I would deal with seeing/talking with people. I forgot my body seems to have that  technique dialed in. Its automatic. I just change and I am social and funny and functioning…more than just fine….I think it would seem I am doing pretty damn well.  I would guess people are shocked when they talk with me.

I don’t get why I am like this. I have no deep dark reason to be like this…It’s not a conscience effort on my part. Maybe I compartmentalize and can pretend with others around that we are just hanging out and that my  kids are ALL in bed or off playing…maybe it allows me some respite..a way to hide from the truth…I am being honest when I say I don’t know.

I have changed a bit though. I used to only be able to cry with my mom and husband…and now the number has grown. Unfortunately though the only people who I cannot control the grief around is my husband and our living children. The ones that matter the most…the ones that are hurting the most right along with me. They suffer the burden of my ache…

Most of what I am going through I feel like its pretty normal. Except this…this makes me feel a little bit crazy.

And a lot fake.

Sometimes people will just leave the room and the heartache pounces on me…and I cry. The longer I go without those releases the more controlling the pounce is. I swear its not on purpose. I am not trying to hold it all in. But when I am with most people we know the hurt stays buried..I think with strangers it can reveal itself. Its sounds ridiculous but it feels like its out of my control when I cry and when I don’t with other people…like my body decides for me.

Today was what Jonathan and I have coined..”a sad sad sissy day” for me. A lot of casual crying. No sobbing messes…I set up my mini office in her room and tried to do a little work on the non-profit.  I couldn’t. So I didn’t….I know there is no rush on it. So I came out with my kids. And together we opened up a ton more sympathy and Just One cards. 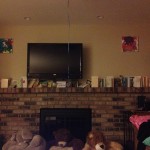 When we were done I added them to our mantle. Our completely full mantel. Now cards are getting stacked on the sides. And I told my boys to look at that…look at that physical representation of helping somebody in need. I told them to take a “eyeball” picture. To remember how people are helping us when we are hurting and in need…and that its what I expect from them.

As we opened, thoughts that have been needling in my head for the past few days seemed to begin to sort themselves out. I have been wondering why Jennifer and the other little girl that passed away were together….and I started to make connections as to why that made sense to me. Those tears were quasi happy ones. 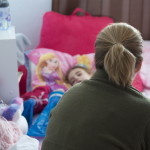 I can’t say I feel her…but I do feel like she is trying to make a connection with me. My sister said she felt “a calling” to come to Gilroy 2 days ago…when I needed her.  Let me just say we are not a “felt a calling” kinda people….

It had to be her. World’s best big sister sending me mine.

I finally got the paperwork I have been waiting on from the insurance company. So I worked on that today. It occupied my mind a bit. Its so much to sort out to be sure we pay the correct amounts. It’s all just maddening to try to sort through. Lucille Packard vs Stanford bills and of course all the insurance lingo. We also had the baby last year so all of that is thrown in there too.. I will get it sorted out. Called a sister in law to help me out..The paperwork I got today was crucial and then I knew what to request from the hospitals. Insurance people haven’t been the greatest but, mercifully, all the hospital people have been and I have been assured we won’t be taken to collections since I am actively working on sorting it out.

Its not a lack of money issue at all, its simply a paperwork issue. Still though its hard to look at these dates and payments 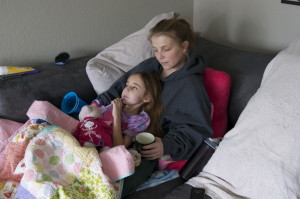 for some of the most horrific times in our lives…and not get emotional.

Through some of these phone calls I got a movie on and Jonathan and I snuggled together in the same spot we held Jennifer during her time on hospice. It felt good to feel my sons healthy body in my arms…making new memories for both of us…Its the first time we have watched something in there since she died. I think he was finally ready…

Before all that though I showed the boys the big print outs of Jennifer from her services. I wanted to let them lead if we keep them out, or if they were simply too hard to look at. Nicholas got so excited. Screaming SISSY and dancing around. He was so happy to see her…I wished I had been recording it the dancing around was the best..but I got this a few minutes later. Hi sissy 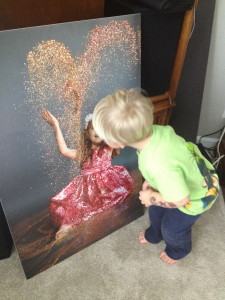 After awhile he calmed down a bit and just played around…coming back to just look at her and give her a kiss.

Jonathan has decided we can keep it there and move it around the house as needed. At one point in the day I was crying and all 3 (living) …

so …lets try this again..the kids were in another room with Tony. I guess I was too loud because I heard Jonathan say he was going to give me a hug, He came in the room and just paused and looked at me…and my 4 yr old son did his best to comfort me. he just looked at me..understanding my hurt and rushed to my arms. Not a word was said…

maybe my message about caring for those in need had an impact.

He also brought me Dumbo and pinkie…and I think Nicholas brought me her stuffed cat….They are amazing examples of how to love..and I hope I am doing the same for them in their moments of grief. ..

I am not so sure though. I worry they are absorbing my talent for crying “alone” not letting other people see my hurt.. I put alone in brackets since during the “sad sad sissy” days they bear witness..Today while the men were working Tony hurt Jonathan’s feelings. Tony did nothing wrong but I had a feeling when Jonathan went inside that he was somehow wounded…something..

…ok so someone! drove me to follow him in a minute later. I found him crying in his room in front of the picture of Jennifer on the floor in 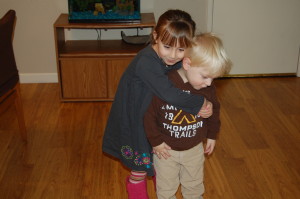 his room. Often Jonathan would go to sissy when we hurt his feelings. Just a little hug from her set things right again. Did he go in for the picture?..or did he go in..

..for a moment, stuck in his own illusion…

I found him and I hugged him. We talked about missing Jennifer. We talked about how he got his feelings hurt. I am glad I go to be there for him too. I just wish he didn’t feel like he had to go off in his moment of hurt….I hope he wasn’t hiding off with his pain since people we care about were around. I don’t want him to do what I do…because that illusion of being ok…it doesn’t work in your favor. Its a habit I need to break…

but that was really a beautiful illusion wasn’t it? 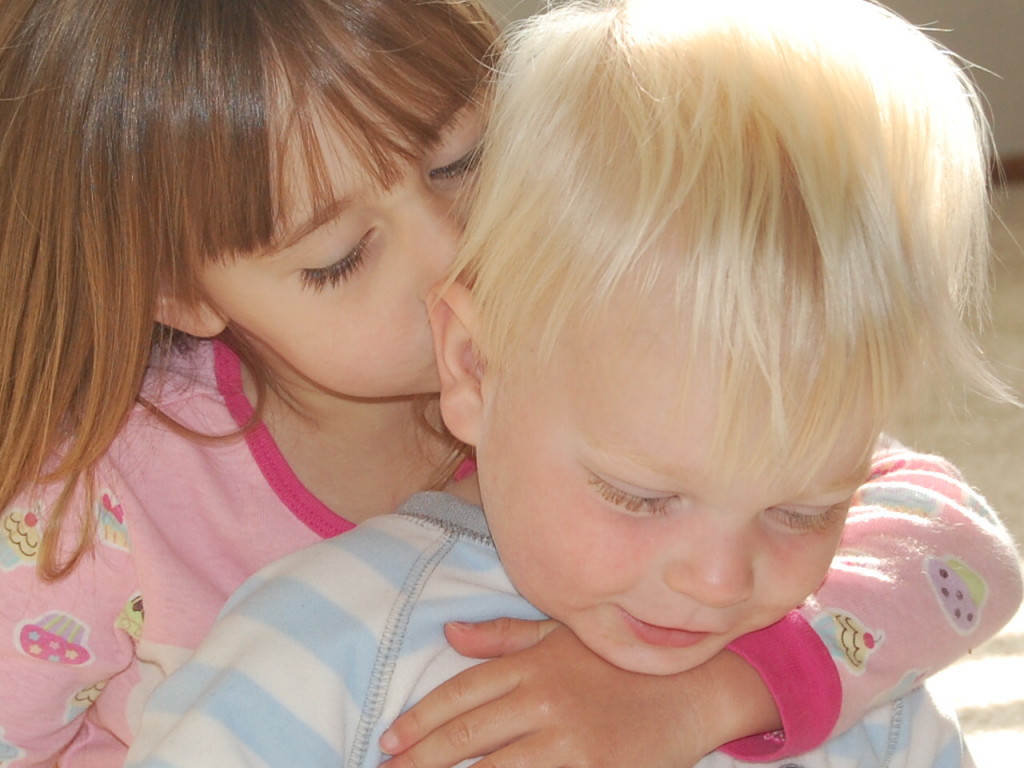